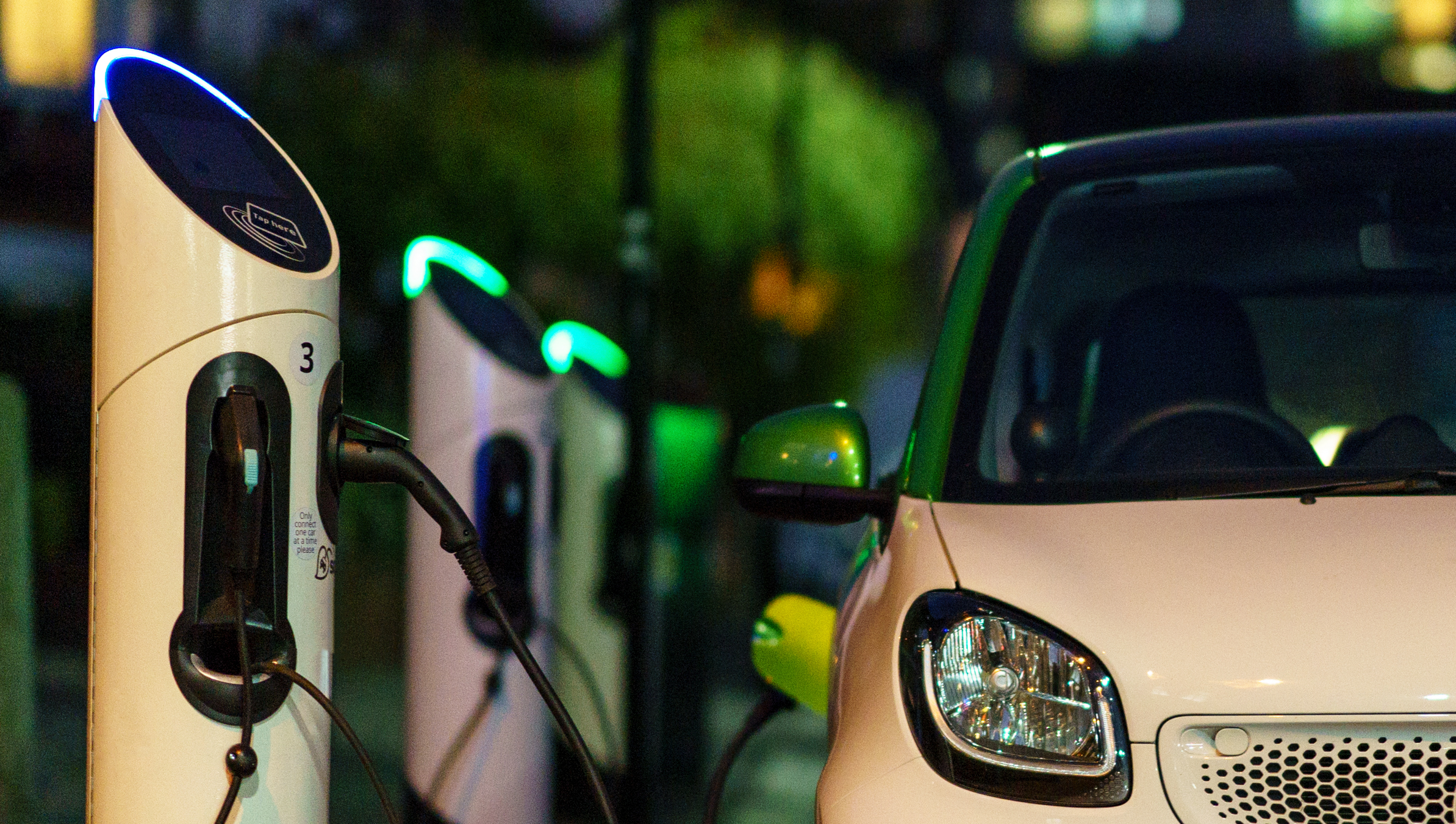 AC chargers also known as Mode 2 (level 1) and Mode 3 (level 2) or are the most dominant charging family present on the market. This charging mode is able to charge an  EV directly via a standard homehold socket, easily accessible from a garage, public or private. The technology of AC charger is also more affordable to due a less complexe electrical architecture and more compact due to the absence of power conversion stages, so more transportable. Nevertheless, his main drawback is its power limitation. AC chargers are able to deliver a power between 3.7 kilowatts and 44 kilowatts, but this charging power capability is also limited by the power of the conversion stage present inside the EV (OBC, On-Board Charger). Indeed EV batteries must be charged with a DC current, so an AC/DC inverter is placed inside the car to achieve this energy conversion. Thus, the charging time of an EV can vary between 12 and 2 hours.

DC chargers, also known as level 3 or direct-current fast charging (DCFC). This charging system converts the AC from the grid to DC before it enters the car and charges the battery without the need for an inverter. Usually called direct-current fast charging or level 3, it operates at powers from 25 kilowatts to more than 350 kilowatts. Thus the EV battery is able to receive a direct power up to 350kW, reducing significantly the charging at 15 minutes for the fastest. 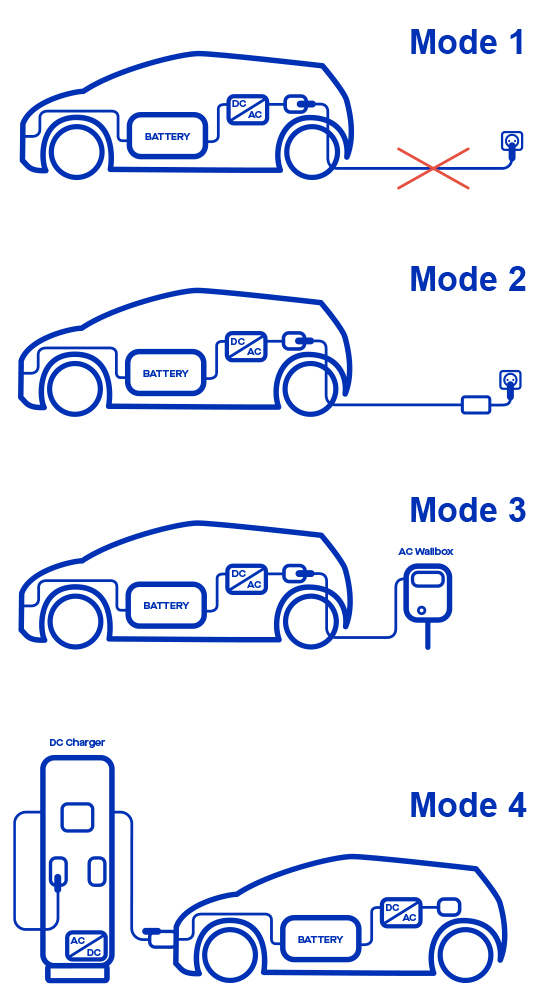 is a charging mode using a simple power cable, similar to an extension cord. It is a connection of the EV to the a.c. supply network utilizing a cable and plug, without any personal electric shock protection placed between the EV and the standard socket-outlet. This mode is not authorized due to its inability to protect Circuit breakers Type A, from the blinding effect, present in houses.

Mode 2 or Level 1 (for US) is a connection of the EV to the a.c. supply network utilizing a cable and plug connected to a standard socket outlet, with a control pilot function and system for personal protection against electric shock placed between the EV and the standard socket outlet. Called also IC-CPD for In-Cable Control and Protection device following the IEC 62752 standard. This cord set is present in each trunk of EV, able to charge up to 32 Arms in singles and three phases architectures. Mode 2 cable is able to detect a leakage current at 30 mA (AC) for a direct electric shock and is also able to detect a leakage at 6 mA (DC) to protect home circuit breaker against the blinding effect.

Mode 3, Level 2 (for US) is a connection of the EV to EV Supply equipment permanently connected to the a.c. supply network, and where the control pilot function extends to control equipment in the EV Supply equipment. Called also AC wallbox, this charging mode is defined by  the standards IEC 62955. This charger is an electrical device generally installed by EV owners inside their home garage, with a charging power between 7.2 to 22kW. We also find Mode 3 charger inside public and commercial area, including payment interface to bill AC electricity inside airport, hotel, workplace, dealerships.  Like the mode 2, it have to integrate a leakage current detection function at 30mA(AC) and 6mA (DC).

Mode 4 is used for the connection of an EV to d.c. EV supply equipment. This charging system converts the AC from the grid to DC before it enters the car and charges the battery without the need for an inverter. Mode 4 is defined by the standard IEC 61851-23. The mode 4 integrates several functions, like the power conversion AC/DC, a personal protection against electric shock, a payment function. The mode 4 is divided into four segment, DC wallbox (<25 kW) present inside airports, hotels, workplaces, dealerships; Fast charger (25-50 kW), Super Fast charger (50-150 kW) and Ultra Fast Charger (150-350 kW) are mainly present inside Highway corridor travel, Highway rest stops, Petrol station area’s, High turnover parking.

A small DC leakage current can disactivate home RCDs’ type A, AC located inside home or building, creating an high risk of electric shocks. To avoid this “blinding effect” standards request a detection of the DC leakage current inside AC chargers.

Residual Current Device (RCD) devices are used to protect people against electric shocks following an indirect contact. A leakage current at 30 mA start to be dangerous for human. Thus in all home electrical panels, RCDs enable to switch off the house power as soon as a 30 mA AC leakage current is detected. RCD are always combined with a protective conductor (PE) and a network system (TT, TN-S or IT). When, due to an insulation fault, a current flows in the PE and it follows that the sum of the currents which circulate in active conductors is no longer zero. RCDs open the main circuit to protect humans.

Type B RCDs must react not only to an alternating current and to pulsed direct current, but also to the following fault currents:

The operation of a type A RCD is comparable to that of a transformer. All active conductors (1*) are wrapped around a magnetic core 2*. As long as the sum of the currents is zero, nothing happens. When a part of the current flows through the PE in the event of an insulation fault 3*, current flows through the active conductors. This current creates a magnetic field in the core. If it is an alternating current, the magnetic field created varies continuously and this variation of the magnetic field induces a voltage in the secondary winding, which feeds the disconnection circuit. 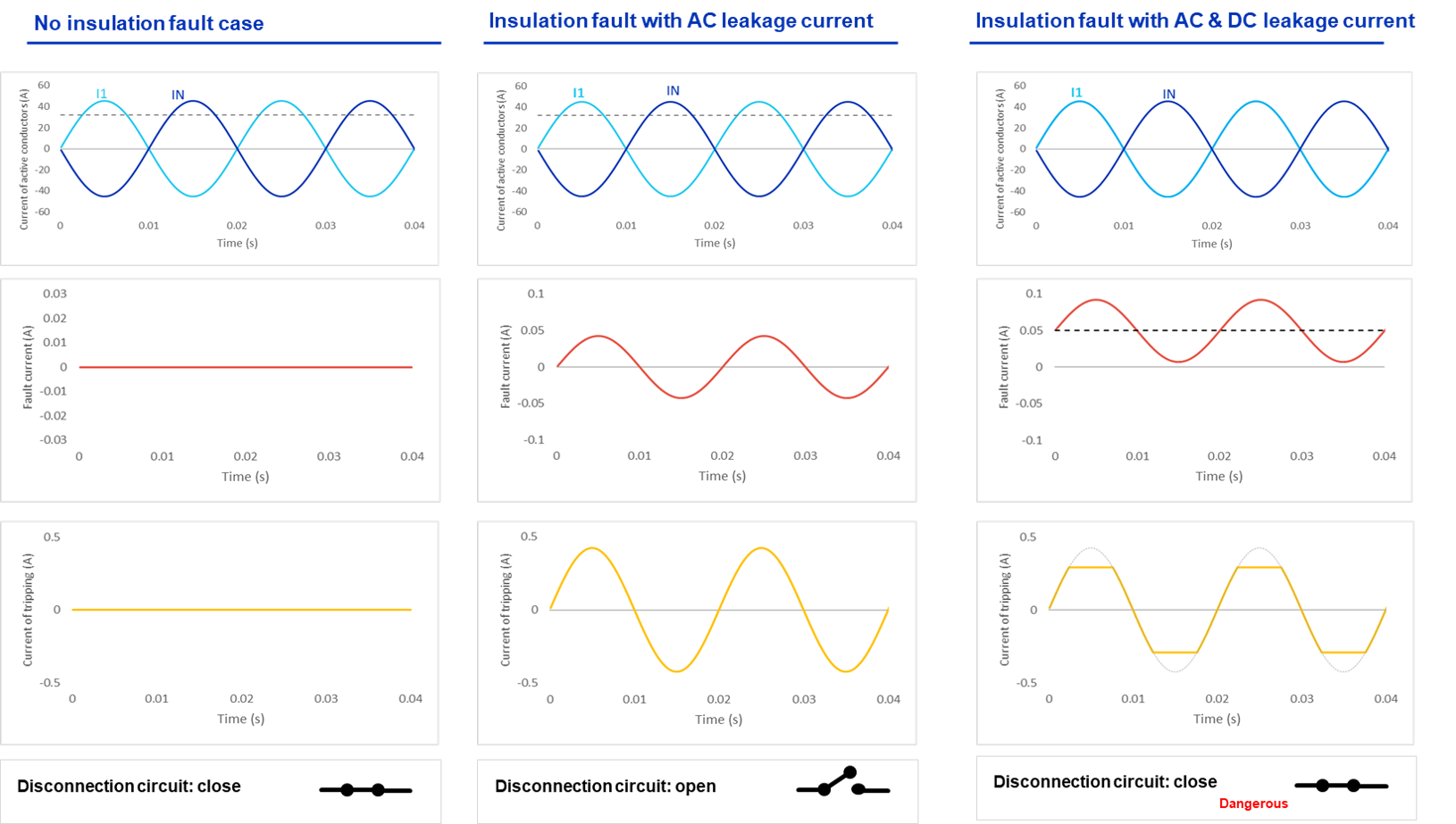 When direct current is added to alternating current in the primary circuit, a variation of the current produces a smaller variation of the magnetic field (Itrip), so that the voltage induced in the secondary winding is lower. The magnetic core is said to be saturated. The correct operation of a type A RCD is only guaranteed if the DC component of the fault current is not more than 6 mA DC. 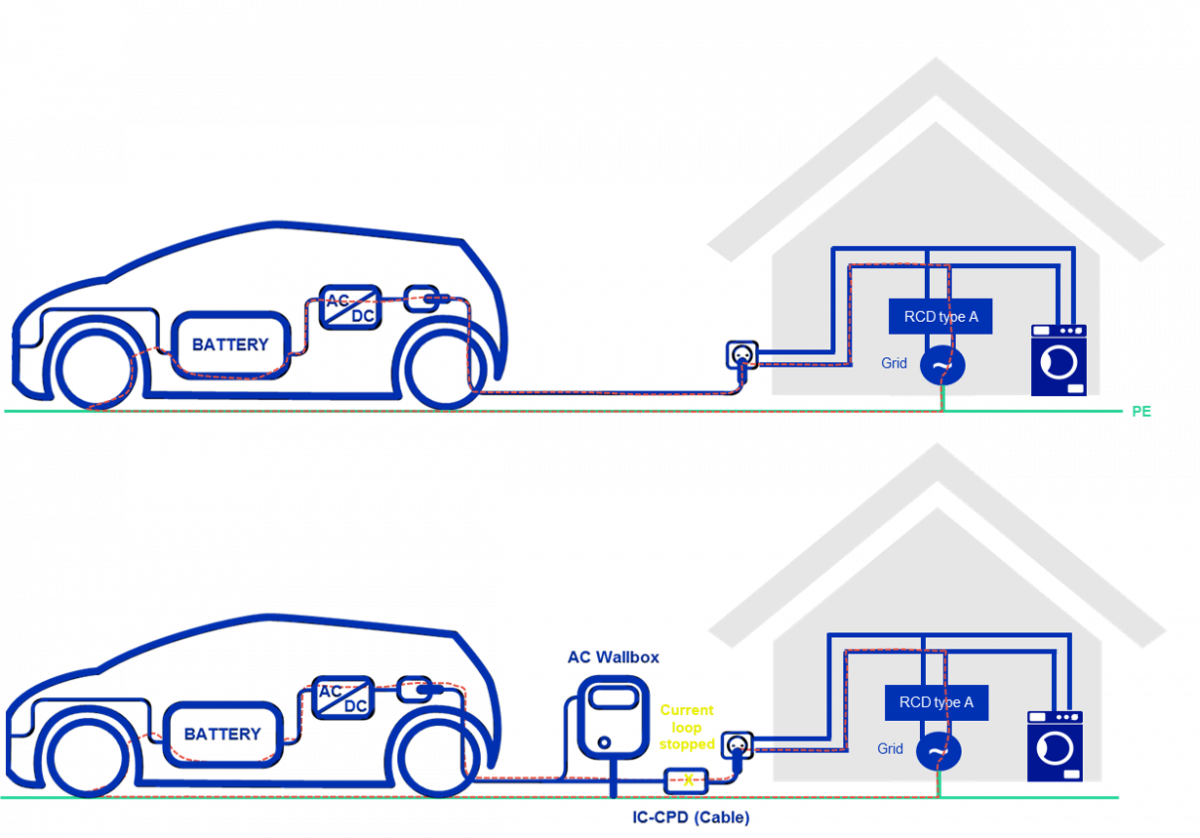 Home RCD potentially blinded
The home RCD can be blinded if an insulation fault coming from the EV appears. Indeed, EVs architecture integrate DC battery, Inverter, able to generate a DC leakage above 6 mA, thus, the home RCD type A could be blinded.

Current control loop for Power modules
Fast charging stations integrate eight rectifiers 10 kW in average. The trend is to increase the power in majority up to 150 kW in each inverter architecture.

The new DC Billing Meter (DCBM) from LEM is a smart and compact billing solution that will help electric vehicle charging stations take advantage of the benefits of DC charging.
Offering a power measurement range from 25kW to 600kW, the DCBM is a legal and certified meter that provides accurate billing of DC chargers.

To reduce this charging time to only a few minutes, charger manufacturers convert the AC into a direct current (DC) outside the car, bypassing the On-Board-Charger (OBC) and supplying the battery pack of the electric vehicle directly. This method can boost charging power up to 400 kilowatts. However, this conversion stage generates power losses, which do not have to be paid for by the end user, the EV’s owner. Thus, an electric meter is placed after the conversion stage to monitor and bill the exact energy transferred to the electric vehicle. 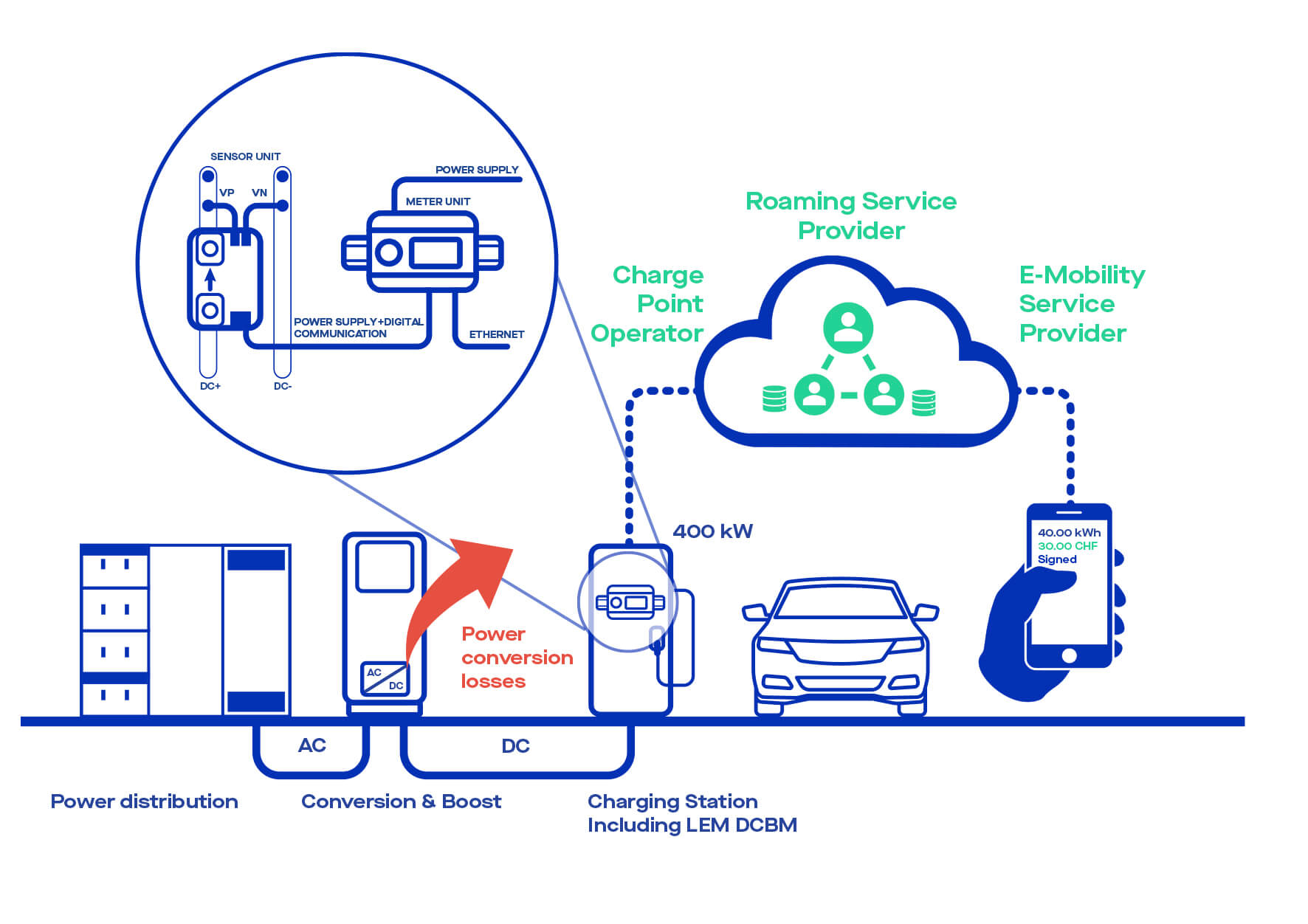